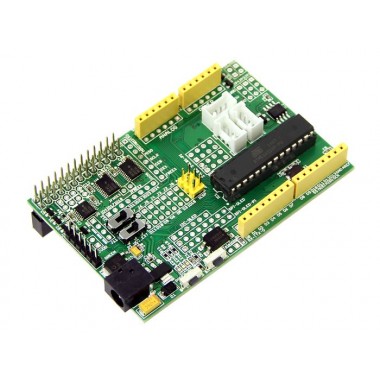 ArduiPi is a new board that bring low level Arduino features combined with high level features of a Raspberry PI.
New Hardware version 1.1.
Arduino is pretty cool but as soon you want to connect it to network, shield are quite expensive and web server will take lot of space into your Arduino and taking some functions off (such as SPI). That is why Raspberry come, it cost less than a Arduino official shield and can do lot high level thing such as web server, database, home automation, … But the drawback is that is I/O ports are quite complex to use and not so efficient than a Arduino. That said, this is why we decided that Raspberry Pi and Arduino need to get married, let them talk together and assign task to the most competitive one.
It has been designed to be open, flexible, extensible, and fulfill majority of use and features available in Arduino world and Raspberry world. What about for example having a full webserver with Apache, Php, SSL, .. , that is able drive low level peripherals such as sensors, leds, motors, strip…. This will become to life with ArduiPi board
The combination of these two words offer so much features that it is only limited by your imagination.

Important
Note this unit does not include Raspbery Pi, it is only ArduiPi board.