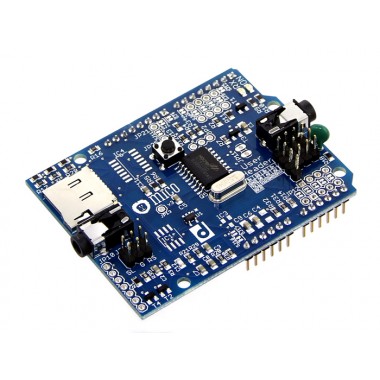 The MICO Shield makes it easy for you to create an Arduino project that interfaces with a cell phone. The Arduino cell phone interface unlock a whole new world of possibilities: projects where your Arduino can place phone and receive phone calls.
An example of a MICO project is where it receives a phone call and presents the caller with a voice prompt: “press 1 for lights on”. MICO can then decode the caller’s button press and take action, in this case turn an output on. Of course everything is customizable: MICO has a microSD card slot so you can store your own voice and all MICO libraries and sketches are open source, free to download and hack.
MICO interfaces to a cell phone’s 3.5mm audio jack. MICO has no build-in cell module or antenna. Because of that, MICO provide some key advantages:

Here’s a collection of sample projects using MICO. Let us know of YOUR project so we can it below!