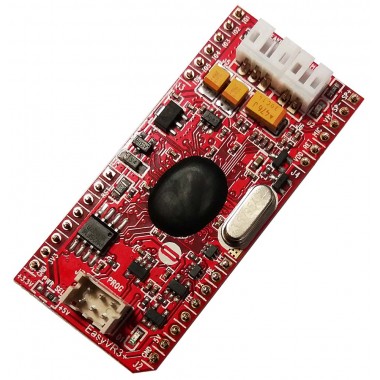 The EasyVR 3 Plus module can be used with any host with a UART interface powered at 3.3V – 5V, such as PIC and Arduino boards. Some application examples include home automation, such as voice-controlled light switches, locks, curtains or kitchen appliances, or adding “hearing” to the most popular robots on the market.

EasyVR 3 Plus allows up to 256 user-defined Speaker Dependent (SD) or Speaker Verification (SV) commands, that can be trained in ANY language, divided into maximum 16 groups (up to 32 SD or 5 SV commands each).

A selection of 26 built-in Speaker Independent (SI) commands for ready-to-run basic controls, in the following languages:

With the optional Quick T2SI Lite license, up to 28 custom Speaker Independent (SI) command vocabularies, with up to 12 commands each, for a total of 336 possible commands.

It can be easily plugged into a solder-less breadboard or standard prototyping board, and it is compatible with the mikroBUS™ specifications (see www.mikroe.com/mikrobus).

Separate male headers are provided inside the package, along with a microphone cable assembly and speaker wires (loudspeaker not included).

SonicNet™ technology for wireless communications between modules or any other sound source (Audio CD, DVD, MP3 Player).
Up to around 21 minutes of pre-recorded sounds or speech .
Up to about 120 seconds of live message recording and playback .
Real-time Lip-sync capability .
DTMF tone generation.
Differential audio output that directly supports 8Ω speakers.
Easy-to-use Graphical User Interface to program Voice Commands and audio.
Standard UART interface (powered at 3.3V – 5V).
Simple and robust documented serial protocol to access and program through the host board.
6 General purpose I/O lines that can be controlled via UART commands.

SD/SV commands are entirely user-defined and they are intended to work only with the voice that trained them. SD only tries to match the trained words, while SV also tries to match the characteristics of the voice and to prevent use by unknown people (voice password). Up to 64 SD commands available starting with firmware Revision 5 included in EasyVR Commander v3.13.0 .

SI commands are meant to work with any people in the same language group and do not require training. A few pre-defined commands can be directly used, while additional commands can be created with a QuickT2SI™ Lite license (sold separately).