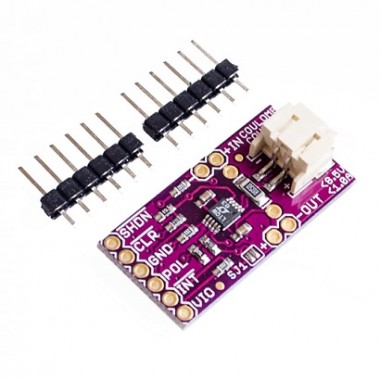 Odometers are extremely useful for cars, they tell you how far you have gone, wouldn’t it be nice if you were able to have a device that does the same for electrical current? The LTC4150 Coulomb Counter Breakout is here to be your odometer for current. If you are wondering: a coulomb is defind as, to put it simply, one amp for one second. This breakout is capable of constantly monitoring the current your sensor is using, is able to add it up, and will give you a pulse each time a given amount of amp-hours have been used. When used effectively and if you start with a full battery, you’ll always know exactly how much of it is left!

At one end of the Coulomb Counter Breakout are headers labeled IN and OUT. Connect your battery or power supply to the IN header or JST battery connector (they’re identical), and connect the OUT header to your project. At the other end of the Coulomb Counter you’ll find a header with six pins. These are the pins you’ll need to connect to your microcontroller and include VIO (Voltage Input), INT (Interrupt), POL (Polarity), GND (Ground), CLR (Clear), and SHDN (Shutdown). Simply install this breakout out between your power source and your circuit, that way all the current your circuit uses needs to pass through the Coulomb Counter to be measured.

At the other end of the Coulomb Counter, you’ll find a header with six pins. These are the pins you’ll need to connect to your microcontroller. Depending on what you want to do, you’ll need at least the first four pins:

Note that the Coulomb Counter is powered by the IN header (usually your battery) and not by the VIO pin, which is used only as a voltage reference for the output pins. This is so that the small amount of power used by the Coulomb Counter itself is included in its measurements for maximum accuracy. The Coulomb Counter uses under 1mA when it’s running, and you can use the SHDN (shutdown) input to reduce its power consumption further (though it will not be able to keep track of current use while shut down).