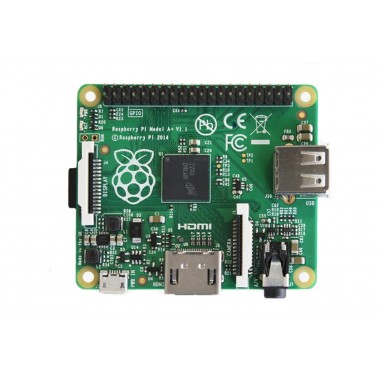 The Raspberry Pi Model A+ is the perfect board for the minimalist Pi fan. This low-cost Pi uses the same processor as the model B+, but does away with the Ethernet jack and three of the USB Ports. This makes it lower power, less expensive and much lighter & smaller! It's still compatible with all Pi operating systems and software, and has the exact same 40 pin GPIO connector and camera/display sockets, so any HATs or Pi Plates or other things that plug into the model B+ will work just the same.

It also has the same HDMI, sound/composite connector and microUSB connector for power

Unlike the Raspberry Model B+, there's only one USB port and no ethernet jack but it's also significantly smaller at 65mm x 56mm if you don't include overhang from the connectors.

Don't forget, you'll need a USB power supply with microUSB cable, and a microSD card with a Raspberry Pi OS on it (we suggest a Raspbian 4G card or NooBS 8G card)

Please note some boards are made in the UK, some in China. WE DO NOT KNOW IN ADVANCE WHICH ONES YOU MAY RECEIVE!