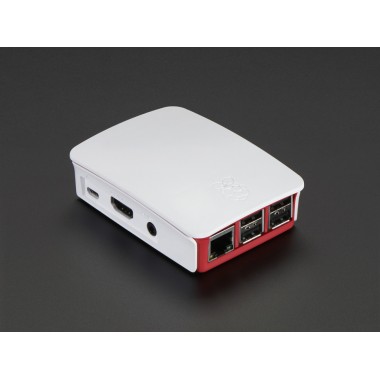 The first 'official' case from the Raspberry Pi Foundation is here in Raspberry Pi's sleek pink and white! While we've had our own set of cases for awhile now, the Pi foundation's first foray into the case world is an impressive, well-designed effort and definitely what we've come to expect from the folks who made the Raspberry Pi.

The case comes in five parts so you can snap in sides or tops according to how you're using your Pi.  If you want a GPIO cable coming out of the top or want to add a hat, there's an impressive pink top with a cut-out in the center for more flexibility.  Or, if you're not a fan of seeing your Pi, there's a white lid that conveniently fills in the gap.

This case's smart design and customizability makes it a worthy addition to the Pi case genre!

This product is just the case.  It does not come with Raspberry Pi or components.  It's designed for the Pi 3 but will also work OK with Pi B+ and Pi 2 if you don't mind that the LED light pipes are blocked (the LEDs moved on the Pi 3)