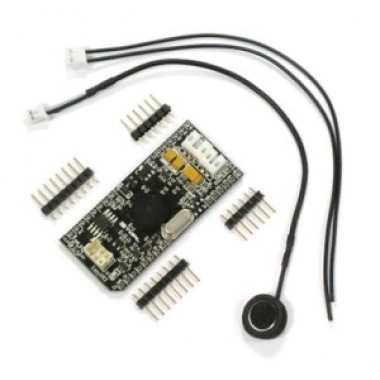 The EasyVR 3 module can be used with any host with an UART interface powered at 3.3V – 5V, such as PIC and Arduino boards. Some application examples include home automation, such as voice controlled light switches, locks, curtains or kitchen appliances, or adding “hearing” to the most popular robots on the market.

It can be easily plugged into a solder-less breadboard or standard prototyping board, and it is compatible with the mikroBUS™ specifications (see www.mikroe.com/mikrobus).

Separate male headers are provided inside the package, along with a microphone cable assembly and speaker wires (loudspeaker not included).

[1] SD/SV commands are entirely user-defined and they are intended to work only with the voice that trained them. SD only tries to match the trained words, while SV also tries to match the characteritics of the voice and to prevent use by unkown people (voice password).

[2] SI commands are meant to work with any people in the same language group and do not require training. A few pre-defined commands can be directly used, while additional commands can be created with a QuickT2SI™ Lite license (sold separately).

[3] At the maximum compression rate.EasyVR 3 (assembly example – speaker not included)