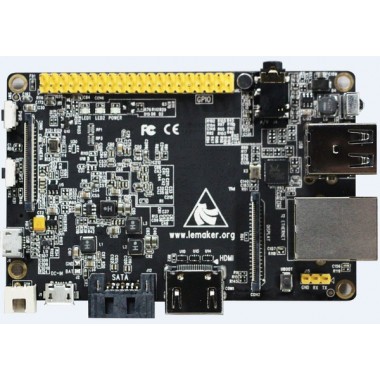 The Banana Pro is an upgraded version of the Banana Pi. It's an inexpensive, versatile board for those looking to get great value for their money, or just looking for a board with as many features as possible. With features such as IR capability, a built-in mic and SATA port, you're sure to find the Banana Pro a useful SBC for all of your computing needs!

The Banana Pro is great for things such as a file-server, a set-top TV box, web browsing and email, as well as more complex activities such as development.

Banana Pro is compatible with many Linux-based operating system and has many distributions specially developed for Banana Pi Hardware. Some of these distributions include Lubuntu, Android, Debian, Bananian, Berryboot, OpenSuse, Scratch, Fedora, Gentoo, Open MediaVault, OpenWRT. Banana Pro also supports BSD. Checkhttp://www.lemaker.org/resources/9-38/image_files.html for some of the available OS images.