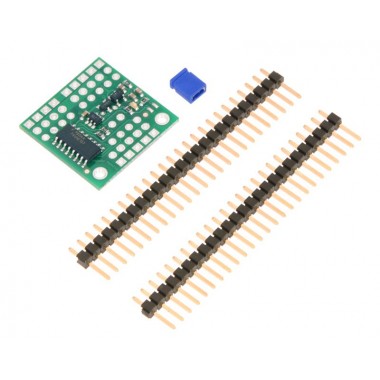 The Pololu 4-Channel RC Servo Multiplexer can be used with standard hobby radio control systems and servo controllers to allow easy switching of servo control between two independent sources using a separate auxiliary channel as the input selector. This makes it ideal for applications in which you have two possible control sources and want to be able to switch between them on the fly. For example, you could connect two RC receivers to the same set of servos or electronic speed controls (ESCs) and allow the master transmitter to decide whether the master or slave transmitter is in control, thereby setting up your own buddy-system training setup. Another possible application would involve multiplexing between an RC receiver and a servo controller, which would allow you to switch between autonomous and manual control of a set of servos. The RC multiplexer (also known as a “mux”) is available preassembled with male header pins or as a partial kit that allows for greater application flexibility and more compact installations.

The RC multiplexer measures the width of incoming RC pulses on the channel labeled SEL and compares it to a user-configurable threshold (with ±64 μs of hysteresis) to decide whether the master (M1–M4) or slave (S1–S4) inputs to the mux should show up on the output channels (OUT1–OUT4). By default, the threshold is approximately 1700 μs and the slave inputs are only selected when the pulses on SEL are above this threshold. The multiplexer has a learning mode that allows you to change the threshold and activation direction. A yellow indicator LED provides feedback about the state of the RC mux.

When the RC signal on the SEL channel is lost or invalid, the optional FAILMODE jumper determines the output behavior. If the jumper is left off, the master inputs will be in control. If the jumper is connected, the output channels go low and stay low for as long as the signal on the SEL channel remains invalid. For many servos and ESCs, a constant low on the signal line will turn them off, which might be desirable if the control signals are known to be bad.

More information about using this product can be found in the user’s guide.