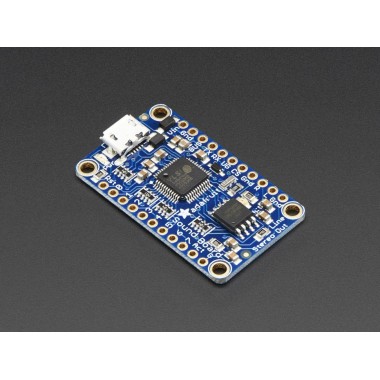 Would you like to add audio/sound effects to your next project, without an Arduino+Shield? Or maybe you don't even know how to use microcontrollers, you just want to make a sound play whenever you press a button. What about something that has to be very small and portable? You are probably feeling a little frustrated: it's been very hard to find a simple, low cost audio effects trigger that is easy to use and does not require any programming

Don't get me wrong, I love the MP3 Music Maker shield and the Audio FX Sound Board + 2x3W Amp.  And our Wave Shield is a dependable classic.  But you either need an Arduino or they might be a little too big and powerful for your needs.  So after a lot of engineering and tinkering we've come out with the Adafruit MINI Sound Board, the fastest way to add audio effects to a project, with a small footprint. We think this is the best sound board for props and costumes!

The Sound Board has a lot of amazing features that make it the easiest thing ever:

What do we mean by trigger effects? Well, depending on your project you may need to have audio play in different ways. We thought of the five most common needs and built it into the Sound Board so you just rename the file to get the effect you want. See the product tutorial for more details

The sound board is designed to be simple: it does not have polyphonic ability, can't play MP3's (MP3 is patented and costs $ to license, so this board uses the similar but not-patented OGG format, there's tons of free converters that will turn an MP3 into OGG), isn't reprogrammable or scriptable, and you can't have any other kind of trigger type. However, there's a good chance the project you want to make will work great.

We designed this board specifically for people who wanted to make props, costumes, toys, and other small portable projects. Check out the tutorial for all the powering options, you can power from 3-5VDC so a 3xAAA battery pack or a LiPoly battery will work well. You can even use our LiPoly backpack to fit on top for an all-in-one rechargeable effects board